send us your message

Thank you! Your submission has been received!

Oops! Something went wrong while submitting the form

a message
from our ceo

Since 2000 NEP has been supporting WWE with broadcast services and live event display – and we love their “go big or go home” attitude!  This year’s Wresltemania was no exception – and we had to match the excitement of massive show with cutting-edge solutions that would do the live experience and broadcast production justice.

Display Solutions – Provided by NEP’s Screenworks team
Display solutions for a WWE event serve two purposes: to help amp up the live experience for fans on site AND to create a colorful backdrop for the broadcast production.  For the 2017 Wrestlemania event our display solution was carried to site by thirteen individual 53’ tractor-trailers carrying a total of 2,074 square meters of Screenworks’ LED products.  Among the many LED screens that were custom-built for this event was a a 265 foot LED ramp from the entrance tunnel on second level of the stadium to the ring on ground-level.  This functioning LED ramp took a lot of planning, because not only did it have to look great, it needed to be able to have 6 motorcycles and a small car ride down and back up – and included an elevator for talent to rise up through at mid ramp.

Broadcast Services – Provided by NEP’s US Mobile Units team
Since 2000, NEP has provided a dedicated mobile unit to WWE for coverage of their events. This year for Wrestlemania, they used their brand new, fully IP, dedicated mobile units WWE 1 and 2. This truck features all new technology, and was built to be flexible enough to expand and support these major annual events. WWE 1 and 2 handled the main Wrestlemania show, as well as the Hall of Fame show, NXT and other wrap-around programming.

Shows for Days
Wrestlemania was only one of the events WWE hosted that week in Orlando.  We also had LED displays at Fan Axxess at the convention center and a WWE business partners meeting at the Marriott hotel, and  provided full broadcast services and display solutions for a Hall of Fame show on Saturday, WWE RAW on Monday and Smackdown on Tuesday. 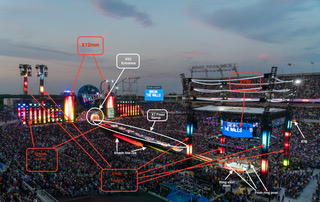 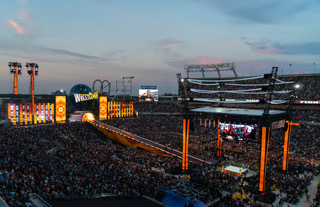 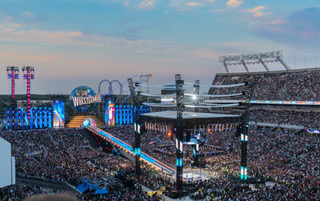